Window on the ATBC No. 6

MESSAGE FROM THE CEO

ATBC had a good, stable year and held its successful 33rd Joint Conference in Brisbane late August; the ATBC Submission to the 2019 Bilateral Economic Consultations (BEC) in Taipei late October; the ATBC Networking and Christmas Party at Sparke & Helmore in Sydney on 28thNovember; and planning for 2020. Macquarie’s big investment in Taiwan offshore wind power coincides with the Tsai government’s “Regional Development” policy. The first shipment of LNG from Western Australia to Taiwan finally arrived at Yu-Ann Port of Kaoshiung on 12 November 2019 as part of the New Southbound Policy, while the Taiwan lychee varieties planting at the Livingstone Shire Council of Queensland will be one of the strong trade relationships between Queensland and Taiwan.

There were over 8.5 million international visitors to Australia in 2018.  Taiwanese visitors to Australia increased by 5% with the number of returning visitors from Taiwan increasing by 12%.  It is encouraging to see so many people from Taiwan enjoy Australia and hope that Australians enjoy Taiwanese hospitality creating more growth in Taiwanese outbound tourism.  The Taiwan Tourism Information Centre in Sydney was officially opened on Wednesday 19th June 2019 at Level 2, Suite 6, 13-15 Wentworth Avenue, Sydney by Dr Trust H.J. Lin (Director, Taiwan Tourism Bureau of New Zealand, Australia, Singapore, India, Middle East – Picture forth left). It will allow Australians to have more direct access to information about Taiwan. Less than a month ahead of Taiwan’s presidential election President Tsai Ing-wen has widened her lead over Mr Han Kuo-yu, a China-friendly Kuomintang candidate.  It is believed that Tsai has been helped by the U.S.-China trade war, which has benefited Taiwan by luring investment to the island.  In the first 10 months of 2019, Taiwan’s economy grew faster than Asian peers such as Singapore, South Korea, Japan and Hong Kong in the third quarter and foreign investment has been a contributor to this growth, reaching nearly $10 billion. According to the Nikkei Asian Review better Taiwan trade conditions, stable consumption and higher investment from both domestic and foreign firms will support growth, but external risks remain on geopolitics as we approach Taiwan’s 2020 election.

Nevertheless, global trade tensions, weak momentum in the global economy and the devastating effect of drought and bushfires have forced the Morrison government to cut its employment forecasts and pressures for climate change reform. In the meantime the Opposition’ Dr Jim Chalmers is calling for a new strategy to drive growth and jobs in regional and suburban areas, working with big business to boost the economy.

I attended this Forum on behalf of ATBC in Darwin, organised by the Chamber of Commerce Northern Territory (CCNT) amongst over 120 delegates from the region. Mr Samir Modi (Chair of Confederation of Asia Pacific Chamber of Commerce and Industry – Picture on the left) and Mr Anura Clochette (Chair of the Asia Council on Tourism) were the main speakers at the Forum. The ATBC is grateful for the NT Chamber of Commerce’s kind gesture to present an acknowledgement award in memory of the late Ross Maddock OAM for his contribution and service to bring a strong Taiwan delegation to Darwin in 2015 at the 29th Joint Conference.  I also participated in the panel discussion on China’s “One Bell One Road” policy vs the “New Southbound Policy” of Taiwan. 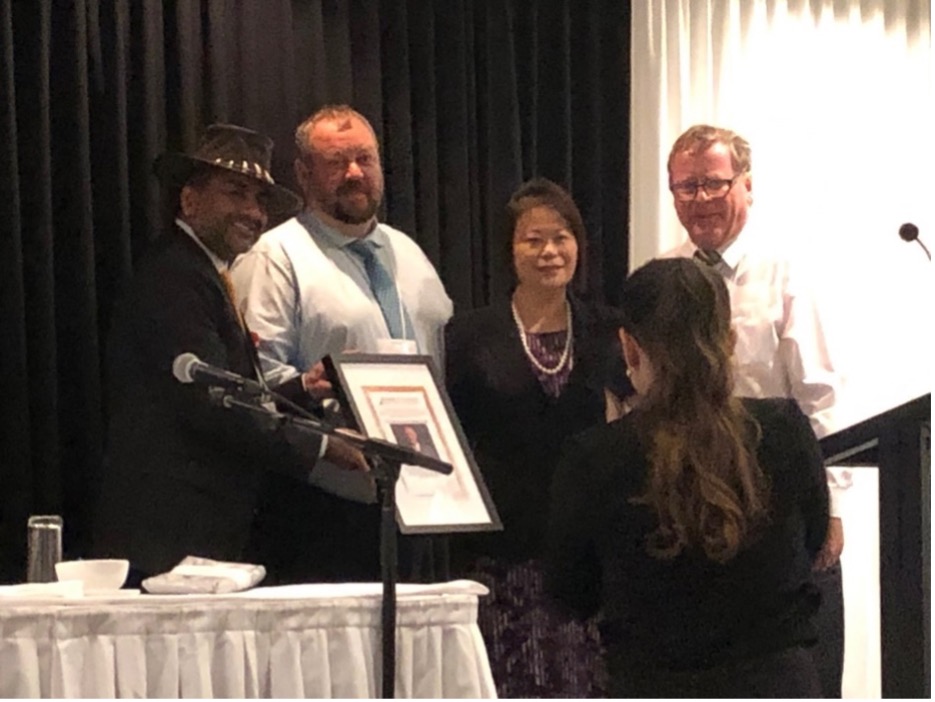 We had the great pleasure of meeting Lord Mayor Schrinner (First picture second left) and introduced him to the ATBC and invited him to attend the 33rd Joint Conference in Brisbane on Friday 14th June. We also joined him at the 17th Inauguration Gala Dinner of the 2019 Australian Taiwanese Chamber of Commerce QLD (ATCCQ) at the Sunnybank on Saturday 15th June 2019. 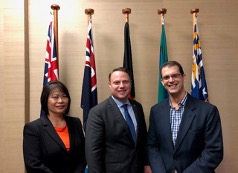 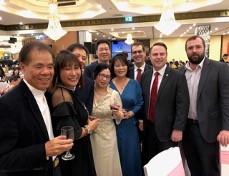 Wei-Fuu Yang (Chairman of the ROC-Australia Business Council – ROCABC – and Chairman of the Taiwan Power Company) and John Toigo (Chairman of the Australia-Taiwan Business Council Ltd – ATBC) jointly presided over the Conference Theme – “Australia and Taiwan: Go Smart”.  Conference topics included: Go Smart; Innovation; Energy & Resources; and Investment & Finance.  The Conference also featured a forum on “Australia-Taiwan Trade and Investment: Building Business around the Investment Queensland Strategy and New Southbound Policy”. The Conference was well attended with more than 180 government and business representatives from Taiwan and Australia.  ATBC is most grateful for all the sponsors, supporters, helpers, speakers, CIECA and delegates who made the annual Conference possible.  I also would like to special thanks to Mr Bruce Hung, Director General of TECO in Brisbane and Mr Gary Cowan, Representative of Australian Office Taiwan for their contributions at the Conference. 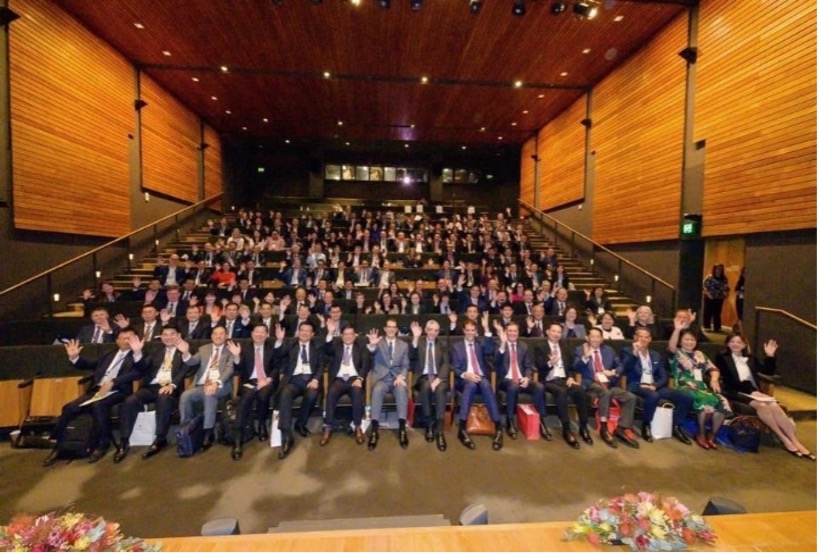 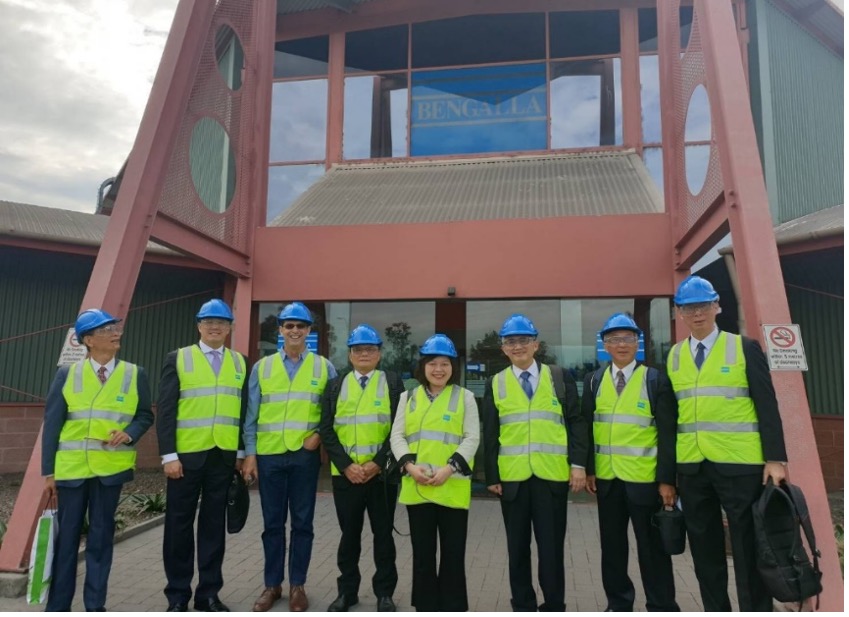 Macquarie Group hosted another very professional and lunch at their Sydney HO.  It was our pleasure to have Dr Stephanie Fahey (CEO of Austrade – Picture second left), Mr Gary Cowan (Australian Representative of Australian Office Taiwan – Picture left) and Mr Elliott Charng, (Taiwan Representative of TECO in Canberra – Picture third left) as our guests of honour. There was some simulating discussion over lunch about 2 ways trade and investment between Australian and Taiwan. Sparke Helmore sponsored this event at their beautiful Sydney MLC Centre office.  It was a happy and informal occasion for networking while Mr Tom Yates, represented Dr Stephanie Fahey (CEO of Austrade) and Phillip Salem (National Managing Partner of Sparke Helmore) were amongst other members and friends. Ms Constance Wang (Director General of TECO in Sydney) has always made herself available to the ATBC over the past few years.  In January 2020 she is going to embark a new role as the Secretary General of the Taiwan Council for U.S. Affairs (TCUSA) in Taiwan where her diplomatic skills and knowledge of international affairs will be effectively used.  All the best DG Wang.  We look forward to working with her replacement Ms Fiona Fan in the new year. 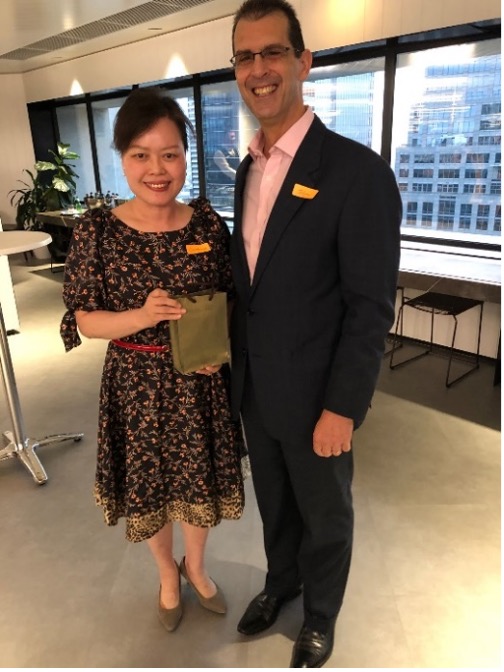 It was a good informative discussion, with some concerns and views exchanged about the upcoming election in Taiwan which it will be held on Saturday, 11 January 2020 and the relationships and tensions between Australia, USA, China and Taiwan.

The panel were (Picture below from left to right):

Dr Roger Lee Huang (Lecturer at Macquarie University. His research includes the history of Taiwan–China relations and he has worked for Taiwan’s Democratic Progressive Party)

Thomas J. Christensen (Professor of Public and International Affairs and Director of the China and the World Program at Columbia University and previously handled China and Taiwan in the US State Department); Mr Andrew Cumpston (Director Victoria State Office) and other dignitaries attended the Reception at this beautiful building in Melbourne.  I also bumped into few old friends and met new friends at the reception. It’s great to meet the newly appointed State Director of Victoria, Ms Emma McDonald at her office and we

discussed possible collaboration in the near future. I was delighted to meet Mr Abraham Lin, who took up the position of Director General of Taipei Economic and Cultural Office in Melbourne May 2019 and his team on Thursday 5th December 2019. 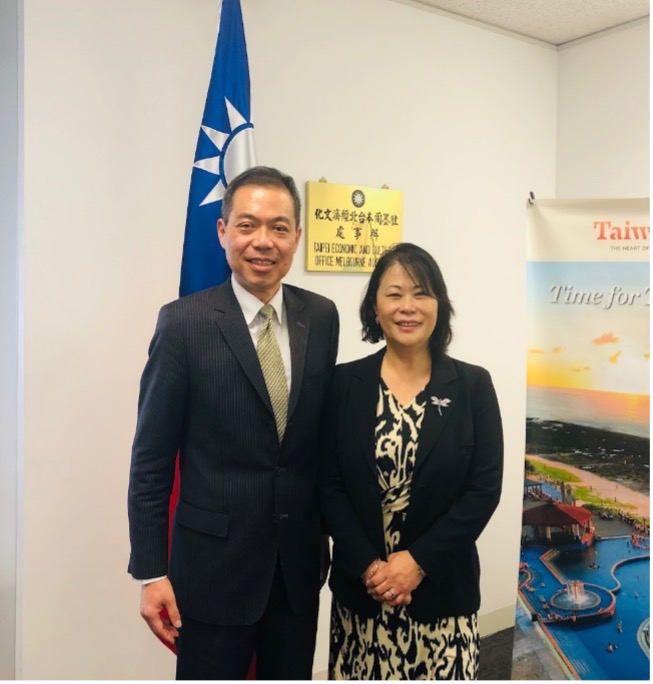 I met Mr Zhining Yang (Manager of the International Investment/Greater China, Department of Economic Development, Jobs, Transport and Resources) a few years ago and it was good to make contact again. It is possible that the 35th Joint Conference of ATBC and ROCABC will be held in Victoria in 2021. Chairman Toigo and I represented the ATBC at the 2019 Bilateral Economic Consultations (BEC) on Tuesday 29th October and the ATBC submission was distributed to the Australia and Taiwan governments prior the meeting.  Deputy Secretary Mr Richard Maude (Picture on the left), Assistant Secretary of East Asian Branch of Department of Foreign Affairs) and Vice Minister Wang Mei-hua (Picture on the right),  Ministry of Economic Affairs, Taiwan are both leading the Australian and Taiwanese delegations at the 2019 BEC.  A few MOUs were signed by the Australian Representative, Mr Gary Cowan (Front left) and Taiwan Representative, Mr Elliott Charng (Picture front right) to end the 2019 BEC in Taipei. The ATBC 2019 BEC Submission is available upon request. Chairman Toigo and I went to see some senior managers and Vice Chair of the Taishin Bank, E. Sun Bank, Mega International Commercial Bank, Hua Nan Bank and Land Bank of Taiwan that may be in Brisbane in 2020.   Chairman Yang of ROCABC was delighted to receive us at his office on Wednesday 30th October. We decided that the 34th Joint Conference would be held in Taipei at the beginning of the second half quarter 2020 (TBC). 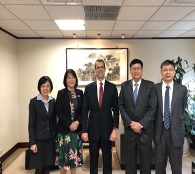 Chairman Toigo and I caught up with Mr Patrick Hafenstein (Trade and Investment Commissioner – Taiwan of Trade & Investment Queensland – picture front), Mr Alex Matos (Executive Director of ANZCham – picture third left) and Mr Damien Van Eyk (Acting Chair of ANZCham – Picture second left) in Taipei to explore the possibility of joint events and collaboration in Taiwan in the near future. 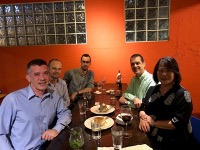 It was great to see an old friend of ATBC who is now based in Guangzhou as Trade and Investment Commissioner, South China and Hong Kong of NSW Department of Industry – Mr Murray Davis.  We would like to see you more often Murray. 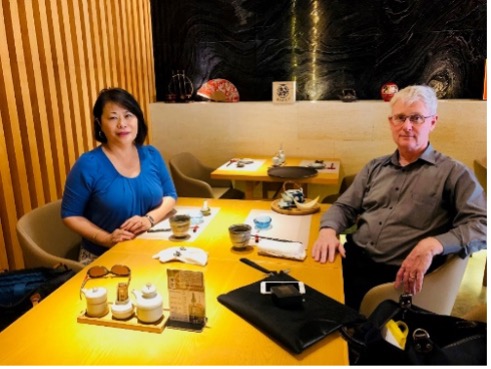 We would like to introduce two new board members of ATBC.  Ms Elizabeth Sullivan and Ms Shani Ford who together have more than 40 years of experience in federal and state government as well as in the business community. They should be able to assist the Board for more positive input in years to come.

We would like to thank Dr Bill Petreski of Strategy61 and Mr Peter Chan of ANZ Taiwan for their wisdom and contributions over the last few years. They are leaving us to move on to bigger things.

Ms Eliza Chui has always providing us with great insight of her knowledges.  ATBC is grateful for her guidance and advice during her term in Taiwan for Austrade and we wish her all the best for her future career and cherish her friendship.  Thank you Eliza and you shall be missed!  We look forward to working with her replacement – Mr Brent Moore and his team in Taiwan in 2020 and beyond. We are excited that Baseball Australia’s Olympic qualifier will be held in Taiwan, Taichung and Dou Liou on 1 to 5 April 2020.  Taiwan, Australia, Chinese Taipei, China, Holland and two countries from North and South America will form the six teams going for the final spot.  For more info:

The International Alliance for Women (TIAW) – a global charitable foundation dedicated to the economic empowerment and advancement of women all over the globe and HO is based in Washington, DC of USA.

I was humbled to be one of the awardees among many other achievers for the “Women Making a World of Difference” on Friday 18thOctober in Sydney. Nominations were received from 56 different countries and there were only 100 recipients of the awards. As the end of the year approaches, I would like to take this opportunity to thank you for your ongoing support as your support and friendship have been integral to enabling the ATBC to grow and flourish.

Best wishes for the Festive Season and the New Year.  We look forward to more working/seeing with you in 2020.